Mount Kawi is a massive volcano near Malang in East Java, Indonesia. This mountain is inextricably linked with Javanese folklore, such as local beliefs in regard to the sacred Dewa Daru tree (alternatively spelled ‘Dewadaru’ or ‘Dewandaru’). It is believed, that the Dewa Daru tree bestows wealth and riches onto the person who catches a falling leaf from this holy tree.

There are several sacred shrines at Mount Kawi, such as the burial tombs of two well-known rêsi (seers), namely Kanjeng Kyai Zakaria II (also known as ‘Mbah Jugo’) and Raden Mas Iman Soedjono (alias ‘Mbah Sujo’), who were the spiritual advisors of Pangeran Diponegoro (1785–1855). When the Java War (1825–1830) broke out, the two rêsi fled to Mount Kawi in order to avoid persecution by the Dutch colonizers. The two rêsi established a spiritual learning center (a so-called ‘asrama’, or ‘padepokan’) at the slopes of Mount Kawi. The two charismatic guru teachers soon gathered a large following of students. 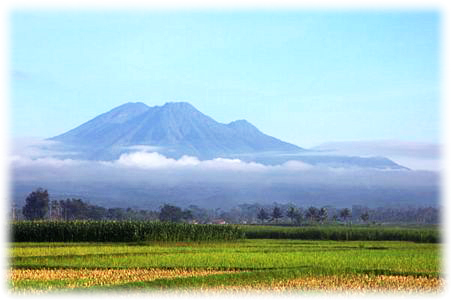 Hence, to this very day, both rêsi are still venerated by the local population in Malang. Indeed, their honorable deeds are commemorated by the local community, who performs rituals and offerings at their tombs at Mount Kawi. Though Mbah Sujo was Javanese, it has been suggested that Mbah Jugo was of Chinese descent. Hence, there are many Chinese who perform pilgrimage to the burial tomb of Kanjeng Kyai Zakaria II at Mount Kawi.

In addition, incense from Mount Kawi is considered a highly preferred paraphernalia for ritual worship. For this reason, the ritual incense from Mount Kawi is commonly used among Javanese mystics and Chinese spiritual practitioners, who thereby seek to enhance the mystical power and effects of the rituals they perform, which can help them to gain all sorts of virtuous blessings.